CHEMTRAIL FLU You Have it?

Do you have chemtrail flu? Find out. 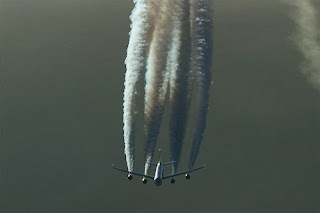 You’re sick. Throat ache, Your nose is stuffy. Your body aches, You’re sweaty, coughing, sneezing, you feel very tired, tinnitis in both ears, diarrhea and all this without a fever.

It’s not the flu according to Dr. Len Horowitz. His opinion is not based on conspiracy theory but on conspiracy fact. Over the past 10 years, Horowitz has become America’s most controversial medical authority. A university-trained medical researcher, Horowitz, 48, charges that elements of the United States government are conspiring with major pharmaceutical companies to make large segments of the population sick.


The mainstream media is reporting that hospital emergency rooms are jammed with patients suffering from a bizarre upper respiratory infection that doesn’t quite seem like a virus. They are reporting that it’s a “mystery” flu and that the flu vaccines are ineffective against it.


If it was a really bacterial or a viral infection, it would have caused a fever but it didn’t  It lasts for weeks, if not months. Sinus congestion, sinus drainage, cough, fatigue, general malaise. People have been feeling “off”.

The Armed Forces Research Institute of Pathology has registered a patent for the pathogenic micoplasma that is causing the epidemic. You can see the patent report in the book, Healing Codes for the Biblical Apocalypse.

Micoplasma is not really a fungus, it’s not really a bacteria, it’s not really a virus. It has no cell wall. It goes deep into the cell nuclei thereby making it very difficult to mount an immune response against it. It’s a man-made biological weapon. The patent report explains how it causes chronic upper respiratory infections that are virtually identical to what’s going on right now.” CHEMTRAILS DESTROY YOUR IMMUNE FUNCTION

Ethylene dibromide is a known human chemical carcinogen that was removed from unleaded gasoline because of its cancer-causing effects.
Now suddenly it has appeared in the jet fuel that high-altitude military aircraft are emitting!”


Ethylene dibromide is coming out of the jet fuels that is causing immune suppression and weakening people’s immune system. Then you’ve got a micoplasma microbe or a fungus that causes an upper respiratory illness. Suddenly you develop a secondary bacterial infection. Now you get hit with ANTIBIOTICS, and the antibiotics cause your body chemistry to go acidic, so now you get rashes and other things, your liver gets full of toxins and comes out through your skin in rashes and they get hyperallergenic reactions associated with the other chemicals.
I’ve got colleagues in the Bahamas, Bermuda, Toronto, British Columbia all reporting the same bizarre seeding of the atmosphere. What is going on is just despicable.All of a sudden now you’ve got human beings completely out of balance and infected by two, three or four microbial co-factors as well as intoxicated by a variety of different chemicals… and you’ve got somebody who’s going to be chronically ill.

The real treatment is a 20 day cure of Bentonite / Montmorrilionite / Green Clay
cheap and effective.
Also keep your Ph above 7, don't give virusses a chance to multiply.
See my articles on the smectite clays.

Chemtrail Flu: Have You Got It Yet?

Maybe you think this is all balony, scifi. But don't forget that since WWII many 'new' diseases have been developed by the US military, such as Spanish Flu, HIV, Ebola, Mad Cow disease, sars, bird flue and many others we don't even know the names of.
We are being mind controlled by the nano particles and nano bots that are ingested in our bodies. They can, by directional microwave (your mobile phone uses microwaves) change your mood and read your mind. Thus make groups of people get angry and demonstrate.
Basically we have been at war since decades, we are at war with our shadow governments.
Please take the time to see the presentations of a German researcher Harald Kautz, who researched chemtrails, how it works and what it does now and in the near future.

Sadly we are at war, with ourselves.