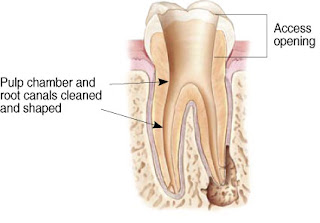 Once the root canal treatment is completed, it is essential to return promptly to begin the next step in treatment. Because a temporary seal is designed to last only a short time, failing to return as directed to have the tooth sealed permanently with a crown or filling can lead to other problems such as deterioration of the seal, resulting in decay, infection, gum disease, fracture, and the possible premature loss of the tooth.
Root canal treatment is intended to allow you to keep your tooth for a longer time, which will help to maintain your natural bite and the healthy functioning of your jaws. However root canals cause the tooth to rot and emit toxins. While the tooth is intact the toxins proliferate in the body.
Often the filler substance put into the drilled canal protrudes at the end, which often provokes a permanent irritation in the jaw bone and surrounding gums.
Very often a toxin emitting tooth puts a large tax on the immune system, provoking chronic diseases of which the origin is not easily found.

If one is lucky enough to have the showing tooth break, the toxins will have the opportunity to come out of the body. A root canal is a temporary fix, eventually leading to extraction and a partial bridge if need be.
So, if a tooth needs root canal work, have it pulled and explore your options. That will eliminate needless toxins in your body.

Yeah, yeah, if the tooth can be saved for a while, why not? Do you really want toxic poison circulating throughout your body until you eventually go through the extraction process?

A tooth has multiple layers, the first is the enamel, the second layer is the dentin and the inner core is the pulp. Tiny fibers come out of the tooth and intertwine with fibers coming out of the bone, and they unite to form the periodontal ligament. This ligament is also an incubator for billions of bacteria to multiply.  The dentin layer is not solid, but is actually comprised of tiny dentinal tubules, that if stretched would be approximately three miles long, per tooth. This is another excellent place for bacteria to hide and develop.
In fact when Weston Price did his research, this is exactly where he found anaerobic bacteria in the thousands of teeth he tested. Since it is impossible to sterilize these accessory canals, it becomes a haven for bacteria to grow and develop. As bacteria multiply and create infection, it will oftentimes extend down into the jawbone where it creates cavitations - areas of necrotic tissue in the jawbone itself.

It's shocking to know that as far back as 1908 Dr. Price and the Mayo Clinic found that bacteria and the toxins from root canals could enter the bloodstream and thus travel to any point in the body and create disease to that particular tissue or organ. (1, 2). Price went on to discover that numerous degenerative diseases have their origin in root canal procedures, the most frequent are circulatory and heart disease. Although his research was buried and hidden from the public in the 1920s, Dr. George Meinig would discover his work 70 years later and bring it to the forefront through his book, Root Canal Cover Up.

According to Dr. George Meinig, (one of the founders of the American Association of Endodontists) and author of Root Canal Cover Up, a high percentage of chronic illness can originate from root canals, the most frequent being circulatory and heart disease. The next common diseases include those affecting the joints, such as arthritis and rheumatism; this is followed by diseases that affect the brain and nervous system such as ALS and MS.